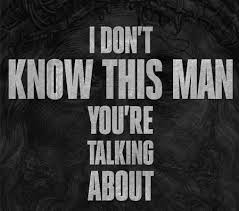 I read a true story about a company vice president who had a very close personal assistant. This personal assistant was trusted implicitly, exposed to every level of information that his boss, the vice president was exposed to. Their relationship was tight, full of trust and full of integrity. This personal assistant would do anything for his very kind and generous boss. They seemed inseparable. The VP repeatedly told his assistant he was being groomed for greater and one day he would see the reality.  However, the day came when the president of the company experienced a major difference with his VP. It took some time, but eventually the president began to tell lies about his VP to the board of directors. He was slowly and methodically working toward the firing of the VP, even though every accusation was false. The only one who could stand up for the integrity of the VP was his personal assistant.

That dreaded day arrived when the board of directors would call upon the personal assistant to testify and the very real rumor was that if the VP was fired, the only way the assistant could maintain a position with the company, and not lose his employment, was to side with the president. The personal assistant didn’t realize that on the day he would be called into the boardroom, both the president and his boss, the VP, would be present as well. In his heart, the assistant was prepared to stand up for and defend his boss, but out of his head and through his lips came only words that aligned themselves with the president. Call it what you will, but at the very least it was self-preservation. His boss slowly turned his gaze toward his long time friend and looked deep into his eyes. They both seemed to drop their heads in disbelief at the same time. Pain struck the assistant in his gut and chills ran down his spine, his face became flush red, his heart pounded with disbelief and his palms were sweaty and stuck to the table where he was seated.

Immediately he knew he failed his long time friend, his family and himself. He still had a job, but he lost all incentive with the company and one day, not long after this very meeting, he just walked away, returning to his prior profession as a commercial fisherman.

What was the name of the personal assistant? How can you and I identify with him?  (See Matthew 26:69-75)