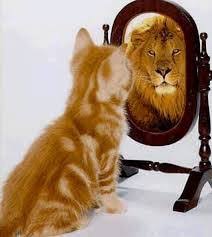 There are those who attend church on Sunday and live according to anything but those thoughts Monday through Saturday.  I can remember as a young teen listening to the minister read the scripture Sunday morning and then close by saying, “Here endeth the word of the Lord for today.”  I remember thinking, I’ve got news for you; here endeth the word for the week for me.  So, yes, I’ve felt like a fake and I’ve been a fake at times.

Someone once wrote, “If you were being accused of being a ‘fake Christian,’ what evidence would you present to prove otherwise?”  I thought that to be a fair and probing question to think about.

Then there was this story from a devotional by Dennis and Barbara Rainy that my wife and I read on the topic of being a fake.

“A young man who had just graduated from law school set up an office, proudly displaying his shingle out front.  On his first day at work, as he sat at his desk with his door open, he was wondering how he would get his first client when he heard footsteps approaching his office.

Not wanting this potential client to think that he would be the first, the young lawyer quickly picked up the telephone and began to talk loudly to a make-believe caller.  “Oh yes sir!” he exclaimed into the phone.  “I’m very experienced in corporate law…Courtroom experience?  Why yes, I’ve had several cases.”

On and on this green lawyer went in his fake conversation when suddenly at the door appeared a man in work attire.  The young lawyer hung up the phone and self-importantly asked how he could offer his services.  “Well,” said the man with a smirk, “I’m from the telephone company and I’m here to hook up your phone.”

When we’re preoccupied with ourselves, we’re not thinking about how we can honor God. When we’re busy trying to look good, we’re not honoring God.  And when we’re faking our “Christian deeds” or trying to use the right Christian clichés, we just might have our charades found out by the telephone repairman.  Or, worse yet, God!