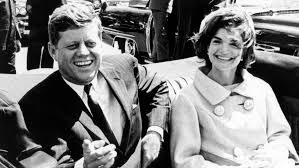 I was seated at my desk in our third-grade classroom when our teacher was called out of the room.  It was a pretty normal and uneventful day up to that particular time.  She returned to the classroom crying.  I never saw her cry before.  Experiencing a teacher crying was totally new for me.  The date was November 22, 1963, the day John F. Kennedy was shot and killed.  We would be dismissed from school early on that day.

I watched our black and white TV that evening as men in suits held onto a man who they claimed killed our president, Lee Harvey Oswald.  They were pushing him through some dimly lit halls to…well, I didn’t know where.  In horror, another man in a black suit came up beside him and fired shots from his pistol.  I watched Oswald fall into the arms of those escorting him.

It was all a bit much for an eight-year-old kid.  The talk for weeks in our country was the loss of our president.  I didn’t really know what it meant, but listening to the adults in my life, I knew it was unprecedented and enormous to them.  Everyone mourned and felt a bit lost, dazed really.

As I look back, what sticks out in my mind now was that I never remember hearing the words Democrat or Republican.  It’s like President Kennedy was neither, just president of the United States of America.

Surely people voted and followed their party of choice, but there was no antagonism, no backbiting, no name calling, no sarcasm and no wishing another harm.  At least not in the part of the world I lived in.

Unfortunately, the world we live in today is extremely different.  Even the major news outlets are different.  They simply have totally left objectivity and what is often reported is their personal slant or belief in an unbelievably, openly biased (which party we support) way.

It was this very president, John F. Kennedy, who said this, “If a beachhead of cooperation may push back the jungle of suspicion, let both sides join in creating a new endeavor, not a new balance of power, but a new world of law, where the strong are just and the weak secure and the peace preserved.  All this will not be finished in the first one hundred days.  Nor will it be finished in the first one thousand days, nor in the life of this Administration, nor even perhaps in our lifetime on this planet.  But let us begin.”