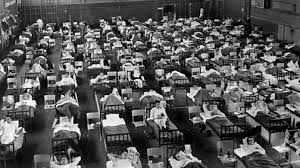 COVID–19 has certainly had an impact on the world, but it’s not my generations first pandemic. In 1968 and 1969, when I was a young teenager, the United States fiercely faced the Hong Kong flu. In that year we experienced 100,000 deaths. To be truthful, I don’t even remember going through it or being encouraged to take one single precaution. The H3N2 flu must have been so much more dreadful with so many deaths over the period of one year.

To put those numbers into perspective, the last recorded flu season in the U.S. had just over 40,000 deaths. But even worse, the flu season before that one (2017) documented over 60,000 deaths. Do you recall front page headlines for either of those very current statistics?  To date, the Corona virus has seen 49,000 deaths. I find these numbers staggering being simply from one nation (albeit large nation) of the world.

My point is these kinds of numbers are not new unfortunately. While every life is precious and important to God and not one death occurs without His notice, He is not the author of this world event. In fact, we were never created to face such devastation because God’s original plan in Genesis 1 and 2 was perfection—no pandemic sickness, no disease, no sin and no suffering. Genesis 3 records how we chose to walk away from God’s plan thinking we knew better and we could be in control of our lives. You and I were created for a Genesis 1 and 2 world, but we now live in this fallen Genesis 3 world.

I am so thankful the story does not end there. I Corinthians 15 reveals that in God’s love He would send a Second Adam, a redeemer who would break the curses of Genesis 3. We are told in this chapter that in Adam we all die, but in Christ we will be made alive. This chapter closes with these words, “Death has been swallowed up in victory…He gives us the victory thorough our Lord Jesus Christ.” Life or death the victory is ours through Christ Jesus!