I received a text message that included a very derogatory comment about the president of the U.S. followed by this line, “I hate him!” I was a bit taken aback by the straightforwardness of emotion and the use of such unchecked and pejorative language.

The dictionary defines the word “hate” to mean: to dislike passionately; feel extreme aversion or hostility; detest. (dictionary.com) Should we ever feel that strongly about any human being, regardless of who they are, what they have done or have not done? Do we have the right to hate someone God has created, someone God determined to be on the earth at this time? Do we have the right to detest someone God loves and someone His Son has died for?

“On May 27, 1943, Luis Zamperini and his crew were participating in a search and rescue mission over the Pacific when their plane suddenly lost power to two of its engines and careened into the sea. Only three of the ship’s 11 crewmen survived: Zamperini, pilot Russell Allen Phillips and tail gunner Francis McNamara. Adrift on a pair of life rafts with only meager provisions, the trio spent the next… [47 days] braving blistering heat, hunger, dehydration and circling packs of sharks. On one occasion, machine gunners from a passing Japanese bomber strafed the airmen, deflating one of their rafts and leaving the other on the verge of ruin. Zamperini and his fellow castaways survived on rainwater and the occasional captured bird or fish, but all soon saw their weight drop below 100 pounds, and McNamara perished after 33 days at sea. Zamperini and Phillips remained adrift for another two weeks before being captured by the Japanese Navy near the Marshall Islands. By then, the men had drifted an astonishing 2,000 miles.”

After being held for some six weeks on the island of Kwajalein, Zamperini was shipped to the Japanese mainland and eventually confined to three different interrogation centers and POW camps. Over the next two years, he suffered from disease, exposure, starvation, and near-daily beatings from guards. Japanese corporal Mutsuhiro Watanabe, nicknamed “the Bird” by the POWs, took particular glee in torturing the [former Olympian] runner. During stints at the Omori and Naoetsu prison camps, Mutsuhiro pummeled Zamperini with clubs, belts and fists and regularly threatened to kill him. On one occasion, he had Zamperini hold a heavy wooden beam above his head and threatened to shoot him if he dropped it; on another, he forced Zamperini and other American prisoners to punch each other until they were nearly all knocked unconscious. Speaking of Mutsuhiro, Zamperini would later say he kept a watch out for him “like I was looking for a lion loose in the jungle.’” (quoted from History.com) 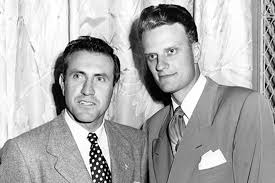 After returning from the war and released as a POW, Luis lived in the constant nightmare of PTSD until he received Christ at a Billy Graham crusade. Luis, it seems, earned the right to hate someone, especially one man named Mutsuhiro, aka, “The bird.” However, Luis is quoted as saying, “The hardest thing in life is to forgive. But hate is self-destructive. If you hate somebody you’re not hurting the person you hate, you’re hurting yourself.”

If you haven’t seen the movie Unbroken, (see the trailer here) you really should. It is Luis’ life story and it is a powerful statement on love and forgiveness. (Unfortunately, the Hollywood movie does not cover his encounter with Christ.)