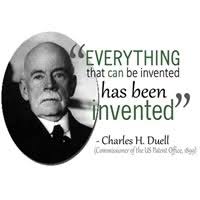 Seems humorous and extremely shortsighted to us today doesn’t it? In fact, we might say there is still so much more to be invented and discovered. Did you know most new inventions are simply improvements over prior inventions? Just think about the transitions the lightbulb has gone through. We might say the more we know or discover, the more there is to know and discover.

It feels like decades ago now, but I met the man who invented something he called the “Stick.” He picked me up at an airport in Kentucky to take me to where I was speaking. Being inquisitive about him, I asked what he does for work. Driving an older car that was several different colors and had a trunk full of tools in it in which my suitcase did not fit, he told me he “…owned a lot of apartments that [he] had to maintain.”

The Stick was the tech piece that allowed the internet and your land line telephone to be used together. Prior to his invention, we used either the phone or the internet, but not both. He told me he sold his invention, not mentioning the value or bragging about his accomplishment.

Later, his pastor told me he became very, very wealthy through his sale, but it did not change who he was. He still loved working with his hands and getting dirty. He even rebuilt the transmission of his old car on his dining room table. He told me his wife was not very happy with him and he was looking forward to our marriage seminar that weekend! He volunteered to be my driver to and from the airport. Truly a man of humility.

Pride leads to disgrace, but with humility comes wisdom. (Proverbs 11:2)

True humility and fear of the Lord lead to riches, honor, and long life. (Proverbs 22:4)

Don’t live to make a good impression on others. Be humble, thinking of others as better than yourself. (Philippians 2:3)

By the way, Charles Duell left the patent office to become a District of Columbia judge appointed by President Roosevelt in 1904. Perhaps a better fit for him?