Philadelphia, Pennsylvania is the home of the Liberty Bell. It is encased in glass and resides near Independence Hall. It was the abolitionists who named the bell. Prior to the 1830’s it was known as The Old Statehouse Bell. The name was changed as America began the fight against slavery. 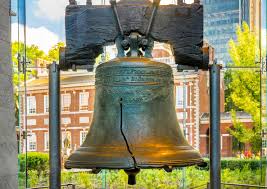 The bell weighs 2,080 pounds and is made of a mixture of bronze, copper, tin, silver and lead. However, the bell on display in Philadelphia is not the original bell as the original one cracked on its first test ring in 1752. It is said that the bell was then melted down and a second one was cast.

In its earlier days, the bell rang to summon lawmakers and Philadelphians to meetings. A second crack occurred around 1846. There was an attempt to repair it but, unfortunately, the repair ended up making the crack even worse. The bell could no longer be used.

The bell bears these words, “Proclaim Liberty Throughout All the Land unto the Inhabitants thereof.” The final sound from the Liberty Bell was when it was last struck seven times on D-Day, June 6, 1944. The Philadelphia mayor did so to spell out the word “Liberty.”

And where do we find those two words in our rich, Scripture-filled American history? Isaiah the prophet penned and Jesus read one day in the temple the following, “The Spirit of the Lord is upon me, because the Lord has anointed me to proclaim good news to the afflicted; He has sent me to bind up the brokenhearted, to proclaim liberty to the captives and freedom to the prisoners.”

Jesus went into the temple, opened the scrolls, read these scriptures and closed the scrolls. It was a word spoken to the world for the generations to follow. Jesus Christ has come to proclaim liberty and to set all mankind free. Quite honestly, no government can do what He can in our lives. Do you personally know this Anointed One? If you do, let freedom ring and tell everyone you know!