Home
About
Called Together
Join 318 other followers 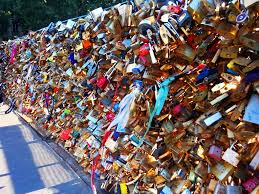 You most likely know about the railings of the Pont des Arts pedestrian bridge in Paris, France. For years couples have been placing pad locks on this railing and then throwing the key into the River Seine as a romantic ritual of their love. Eventually the city had to intervene. It seems that according to those who know such things that the added weight of thousands of locks affected the integrity of the bridge and needed to be removed.

In June of 2015 forty-five tons of symbols of love were removed from the bridge railings. When I read about this it made me wonder how many of those couples were still enduring, committed, making sacrifices for

one another and “locked” together in love. In 1975 I said “I do” to my bride, Mary, while at the same time saying “I don’t” to every other woman. We never put a padlock on the bridge in Paris, but we have remained committed in our love to God and then to each other. I guess when God’s word says that His love endures forever (Ps 106:1), He provided a picture to us that love can, at the least, endure a life-time.

One thought on “Love Locks”