Most everyone knows of or has heard of dog tags. They are small oval shaped metal discs placed on a chain to be worn around the neck by the service member. They are an identifier. But what is the history or the story behind dog tags? 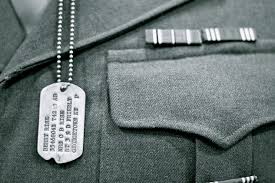 In 1936 William Randolph Hurst, the newspaper tycoon, wanted to challenge support for President Roosevelt’s New Deal. Apparently Mr. Hurst heard that the newly formed Social Security Administration wanted to give out nameplates for personal identification. Hurst referred to them negatively as “dog tags.”

Soldiers from World War II also referred to them as dog tags, claiming they were being treated like dogs. But some form of identification tag goes all the way back to the civil war as soldiers were afraid that upon their death no one would be able to identify them. Some men carved their names on metal discs or pieces of wood and hung them around their neck. They feared a grave marked “unknown.”

ID tags became official in 1906 when the Army required an aluminum disc be warn by all soldiers under their uniform. Then in 1916 two tags were required, one for the body and one for the grave of a soldier killed in action.

I still have mine issued by the United States Air Force when I served back in the early 1970’s. I remember them asking me what my religion was. I wasn’t quite sure what to say so I quickly spoke up that I was a Christian. Within minutes I had two dog tags with my name, social security number (no longer placed on dog tags since 2015) blood type and at the very bottom the word “Christian.”

I love that about my dog tags. They proclaim something very important about me. And while they no longer hang around my neck that proclamation remains solid within my heart. I am an unashamed Christ follower and I will wear that name with pride. It is that name and only that name, the name of Jesus, in which we can find eternal life with our heavenly Father.

Happy Veterans Day and if you have served your nation or are serving, THANK YOU!