Some years ago I was meeting with a young married man for various counseling issues. I really cannot remember what they were, but I do remember one thing from that time. He inadvertently mentioned that he enjoyed “breaking and entering.” I said, “You what?” He shared that for years he and his friends would break into garages and sheds and steal small items simply for, “The thrill of it.”   I shared, “You do know that stealing is against the law, not to mention one of the Ten Commandments, right?”   He assured me that he did, but added that no one has been hurt by his actions and that he enjoyed the dare and the challenge. “Further,” he said, “I find nothing wrong with it.” I added, “But I thought you told me you were a Christian.” He assured me he was. 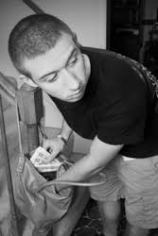 A counseling plan: During his history statement he shared that he and his wife had a young son who was five years old. I had a plan. I looked straight at him and with boldness said, “I recommend you take your five year-old son along with you and the gang the next time you decide to break into a place.” He said, “What?” “Yea,” I continued, “Take your son, he’s small and you can put him through a window and then he can unlock the door for you to enter.” With a wrinkled face he replied, “I thought you said you were a Christian counselor.” “I am,” I told him. “But here’s the thing…start your son out young and train him thoroughly in thievery so he can be just like his dad.” I went on to say, “In commonality the two of you can have some real father/son bonding time breaking into sheds and garages.” I went on to say, “You’ll be so proud when he becomes just like you!”

He committed all the sins his father had done before him; his heart was not fully devoted to the Lord his God…   (I Kings 15:3)

2 thoughts on “Teaching Your Children to Steal”